We have been following Joe for some time now, most recently we featured his return to dialysis following the failure of his transplant. This blog and accompanying video features Joe and his father Philip as they go through living donation as a father donates to his son.

A father donates to his son 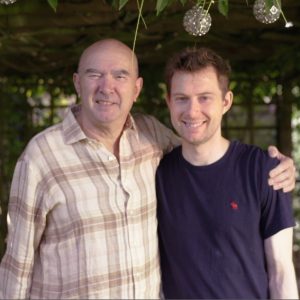 I confess to have been a little apprehensive about having the operation, after all I was 65 and the last time I had an operation was fifty years ago. Things have changed. On the down side there is no more free Guinness/Mackeson but on the plus side more patients survive – seems a fair trade. Another plus thing is that Doctors talk to you. On my first day in Hospital the surgeon came to see me in bed and explained everything and the only thing left for me to worry about was the anaesthetic but soon after the surgeon had left the Anaesthetist came to see me, he was one of the nicest persons that I had ever met. I slept without fear.

I was in hospital for six days; nothing spectacular, I woke up after the operation, it was a wonderful success for me and for Joe and I felt smug. The feeling of smugness left at the same time that the morphine did, I had just had a serious operation and had tubes in me. I felt sick, sleepy and in discomfort. Not for long though, the worse passed but I felt very weak and the discomfort was slow to abate and I was constipated (I hated that). So I settled into being a patient, you know how it is, looking forward to visitors and then falling asleep when they arrive, marking time waiting for meals and yes, falling asleep just before they were served, being woken up for blood tests, tablets and questions. You get the picture.

The first few days are now a bit of a blur but once the tubes were removed and I was left to feel sorry for myself things started to settle down. The discomfort and the weakness became annoying and I felt very lethargic. However, that is not allowed. To begin with it was the nurses that cajoled me into sitting up, standing up and even walking. Then it was Joe, who looked as if there was nothing wrong with him, that encouraged me to walk: First walks to the nearest bathroom and later walks to the furthest. Eventually, we explored mysterious corridors and studied the pictures and notice boards and generally took our time.

Then they let me out! I must say that the ward staff were wonderful and the comeradery among my fellow patients will never leave me but I was sure glad to go home. Although my wife Lynn and our daughters constantly visited me on the ward, it was so good to be home with them (and our dog). I suppose I knew then that everything was going to be alright.

It took time to recover and day by day and each and every day I got a little better. I am lucky to have a wonderful and loving family who forced me to do what the doctor ordered. I am lucky to have friends and family that would take me out to prevent me becoming stir crazy. I am lucky that I was able to be a donor.